What is Acute Sinusitis? Symptoms and Treatment

What is Acute Sinusitis?
Sinuses are air-filled cavities between the bones of the upper face: between the eyes and behind the forehead, nose, and cheeks. The lining of the sinuses is made up of cells with microscopic hairs on their surfaces called cilia. Other cells in the lining create mucus. The mucus traps bacteria and pollutants and the cilia push the mucus out through narrow sinus passages into the nose.
When the sinuses become inflamed or infected, the mucus thickens and blocks the passages to one or more sinuses. Fluid builds up inside the sinuses producing greater pressure. Also, germs can become trapped, grow and infect the lining. This is sinusitis.
Sinusitis can be chronic (long-lasting or recurrent) or acute. Acute sinusitis is defined as lasting three weeks or fewer and should occur no more than three times a year. Acute sinusitis is a very common occurrence. Typically, an upper respiratory viral infection causes it. 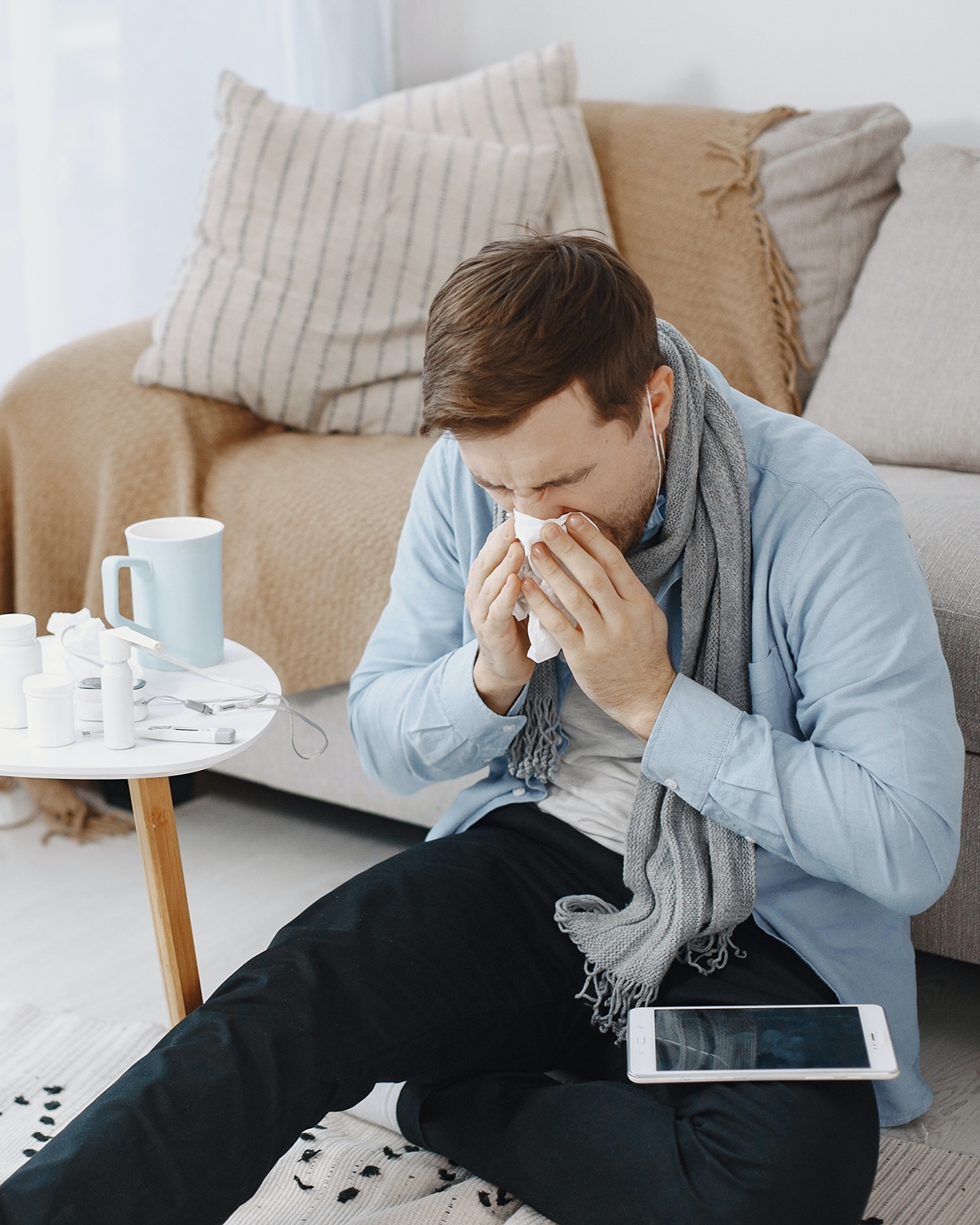 The lining of the sinuses can become inflamed and swollen as a result of the following:
Infections caused by viruses, such as the common cold
Allergies
Pollution of the air and cigarette smoke
Dental infection
Nasal passageways that have been narrowed by nasal polyps

Nasal congestion, a thick green nasal discharge, fever, headache, fatigue, and facial pain are all common signs of acute sinusitis. Certain symptoms vary according to which sinus is irritated. For instance:
Frontal sinusitis (behind the forehead) can produce pain in the forehead, which is increased when laying on your back.
Ethmoid sinusitis (pain between the eyes, swelling of the eyelids, loss of smell, and pain when touching the sides of the nose) might occur.
Sphenoid sinusitis (behind the eyes) might result in earaches, neck pain, or a headache at the crown of the head or deep behind the forehead.
Sinusitis in the maxillary sinuses (behind the cheeks) can produce pain in the cheeks, beneath the eyes, or in the upper teeth and jaw.

In its early stages, a sinus infection can be difficult to detect since it might mirror a common cold. Both of these conditions might result in nasal congestion and weariness. A regular cold, on the other hand, typically resolves within five to seven days, although an untreated sinus infection can persist three weeks or longer. Additionally, sinus infections are more likely to be associated with a green nasal discharge, fever, and face pain.
Acute sinusitis is diagnosed by your doctor based on your symptoms, medical history, and a brief office examination. The doctor will inquire about your symptoms and their duration, examine your ears, nose, and throat, and may tap or press on your face to determine if specific sinuses are sore.
If your doctor is unsure of your diagnosis, he or she may do additional procedures to visualize the sinuses. Certain physicians may place a nasopharyngoscope (a narrow, illuminated tube with an attached camera) into your nose to check for abnormalities. X-rays and computed tomography (CT) scans can also be used to visualize the sinuses, particularly those located deep within the head.

Certain precautions can be taken to reduce your risk of having sinusitis. If you currently smoke cigarettes, you should consider quitting. Smoke has been shown to irritate nasal airways and increase the risk of infection. Nasal allergies can sometimes result in sinus infections. By identifying and avoiding the allergen (something that causes the allergic reaction), you can help prevent sinusitis.
If you have congestion as a result of a cold or allergies, the following measures may help you avoid developing sinusitis:
Consume plenty of water. This thins nasal discharges and maintains the moisture level of mucous membranes.
Soothe nasal passageways with steam. Inhale deeply when standing in a hot shower or while placing a towel over your head and inhaling the vapor from a basin filled with hot water.
Avoid blowing your nose vigorously, since this might propel bacteria into your sinuses.
Certain physicians recommend that patients cleanse their noses at home on a regular basis to remove mucus. This may aid in the prevention and treatment of sinus infections.

Numerous sinus infections resolve on their own. Several drugs, on the other hand, may speed recovery and decrease the likelihood that an infection would become chronic.
Decongestants – Congestion is frequently the cause of sinus infections, and decongestants can help clear the sinuses and allow them to flow properly. Numerous options are available:
Without a prescription, pseudoephedrine (Sudafed) is available alone or in combination with other drugs in multi-symptom cold and sinus cures. Pseudoephedrine has been known to produce sleeplessness, a rapid heartbeat, and jitteriness. Use with caution if you have hypertension or a cardiac problem. Alternative over-the-counter oral decongestants include phenylephrine (such as Sudafed PE). Consult your pharmacist if you are taking products containing oral phenylephrine to ensure there are no interactions with other medications you are taking.
Nasal sprays contain oxymetazoline (Afrin, Dristan, and others) and phenylephrine (Neo-Synephrine, and others). They are effective and may have less of the adverse effects associated with pseudoephedrine. However, prolonged use of a nasal decongestant can result in severe symptoms when the prescription is discontinued. This is referred to as the "rebound effect."
Antihistamines – These treatments assist to alleviate the symptoms associated with nasal allergies, which can result in inflammation and infection. However, some physicians advise against using antihistamines during a sinus infection due to the possibility of severe dryness and slowed drainage. Numerous OTC antihistamines are available in both brand-name and less-priced generic forms.
Nasal steroids — Nasal membrane edema is reduced by anti-inflammatory sprays such as mometasone (Nasonex) and fluticasone (Flonase). As with antihistamines, nasal steroids are most beneficial for people who suffer from nasal allergies. Nasal steroids have a lower drying effect than antihistamines. In comparison to nasal decongestants, nasal steroids can be utilized for an extended period of time.
Saline nasal sprays – These salt-water sprays are safe to use and may give comfort by moistening the nasal passages, thinning mucus discharges, and aiding in the removal of any bacteria that may be present.
Sinus pain can be treated with acetaminophen (Tylenol), ibuprofen (Advil, Motrin, and others), or naproxen (Aleve).
Antibiotics – If your doctor feels that your sinusitis is caused by a bacterial infection, he or she may prescribe an antibiotic.
Sinusitis does not always require antibiotic treatment: Consult with your doctor to determine whether an antibiotic is appropriate for you. Bear in mind that antibiotics might cause allergic reactions, dermatitis, and diarrhea. Additionally, excessive antibiotic use eventually results in the spread of germs that are resistant to the most widely administered antibiotics.

When Should You See A Doctor?

If you have facial pain accompanied by a headache and fever, cold symptoms that continue more than seven to ten days, or persistent green discharge from the nose, see a doctor. Consult your doctor if your symptoms do not improve within a week of initiating medication. Call sooner if symptoms worsen.
If you experience frequent instances of acute sinusitis, you may have allergies or another source of sinus congestion that is treatable. Consult your physician for advice.

Acute sinusitis has an excellent prognosis. The majority of cases resolve within one to two weeks, frequently without the need for antibiotics.
References