As a young guy, every choice, attitude, and the connection was geared toward the development of his own power and riches. However, he fell sick at the age of 53. His entire body began to ache, and he eventually lost all of his hair. The world's sole billionaire could purchase everything he desired while in full anguish, but he could only digest milk and crackers. "He couldn't sleep, wouldn't smile, and nothing in life meant anything to him," one associate wrote. He was projected to die within a year by his highly trained personal physicians. That year flew by at an agonizingly slow pace.

As he neared death, he awoke with vague recollections of a dream about not being able to take any of his accomplishments with him to the next world. The man who ruled the corporate world abruptly found he was powerless over his own life. He was forced to make a choice. He notified his attorneys, accountants, and managers that he desired to direct his assets toward hospitals, research, and mission work. John D. Rockefeller established his foundation on that day.

This new direction ultimately resulted in the discovery of penicillin and the subsequent development of cures for malaria, tuberculosis, and diphtheria. But perhaps the most remarkable aspect of Rockefeller's story is that when he began to give back a portion of his wealth, his body's chemistry changed dramatically, and he improved. It appeared as though he would die at the age of 53, but he lived to the age of 98.

Rockefeller developed an attitude of gratitude and donated the lion's share of his wealth. Thus, he became whole. Being healed is one thing. It is another to be restored to wholeness. He was a member of the Baptist Church. He was faithful in his service to God in the church, cleaning God's house, until his death!

Prior to his death, he wrote in his diary, "I was taught early on to work and play; My life has been one long, joyful vacation; Full of work and play, I abandoned the worry along the road, and God has been gracious to me every day."

*I hope that the genuine tale of this man's life, who also happens to be the world's first billionaire, inspires many affluent individuals or those pursuing fortune to reconsider how they might offer more LOVE to humanity. 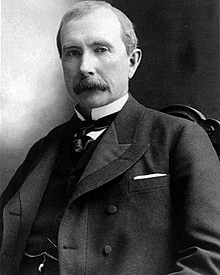