POLTAVA CITY GUIDE :: WHERE TO STAY, WHAT TO SEE AND WHAT TO EAT 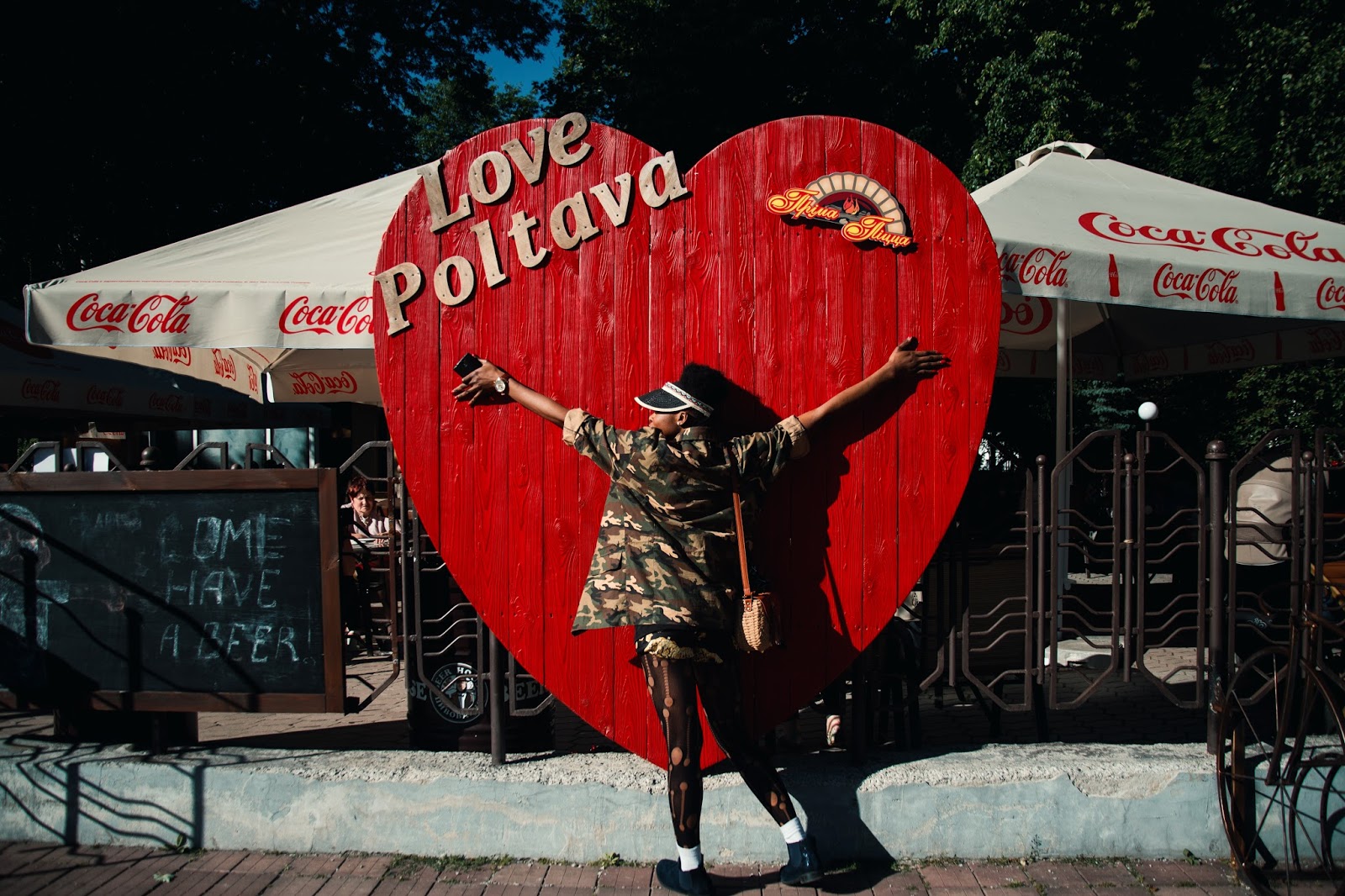 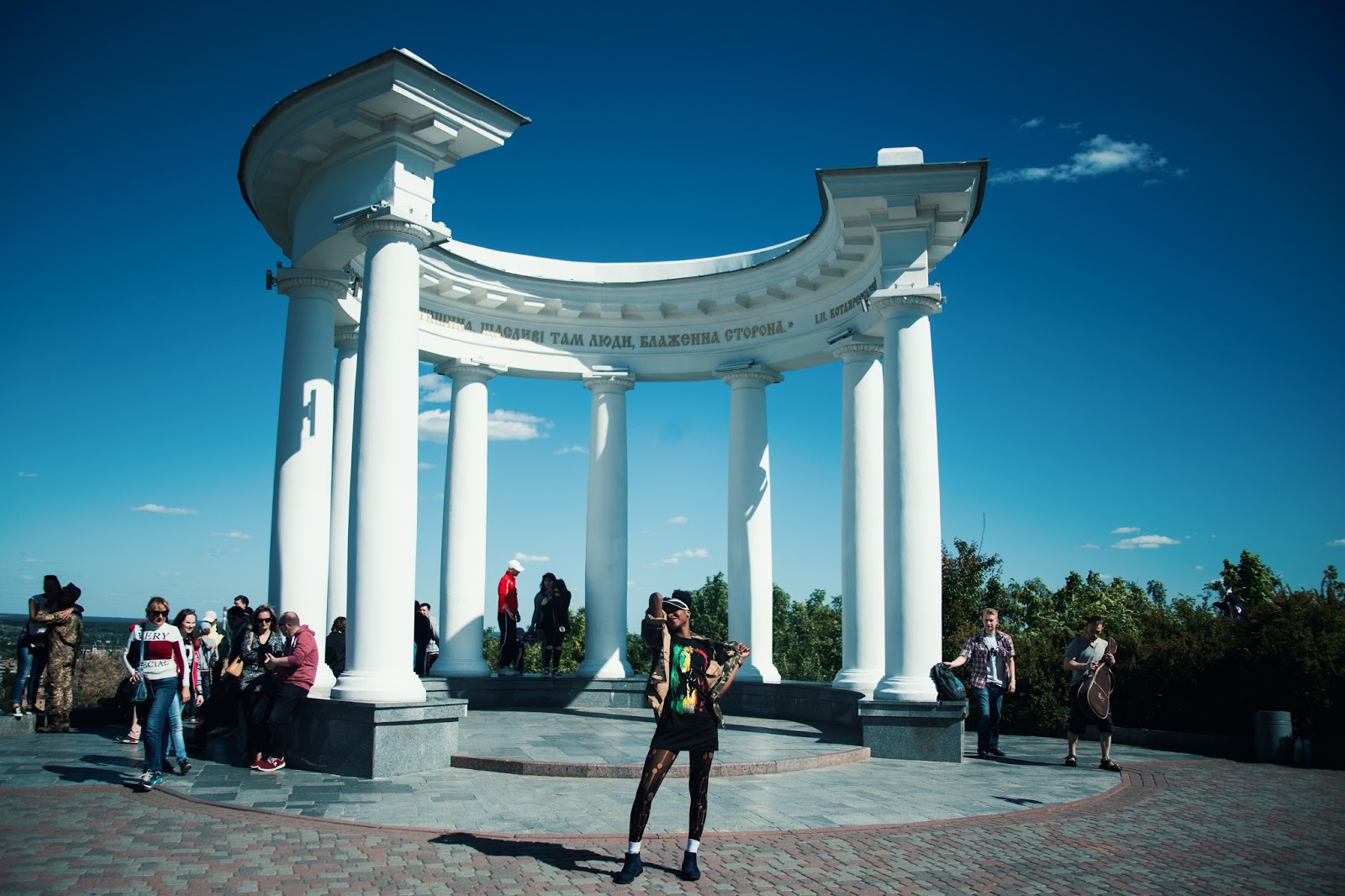 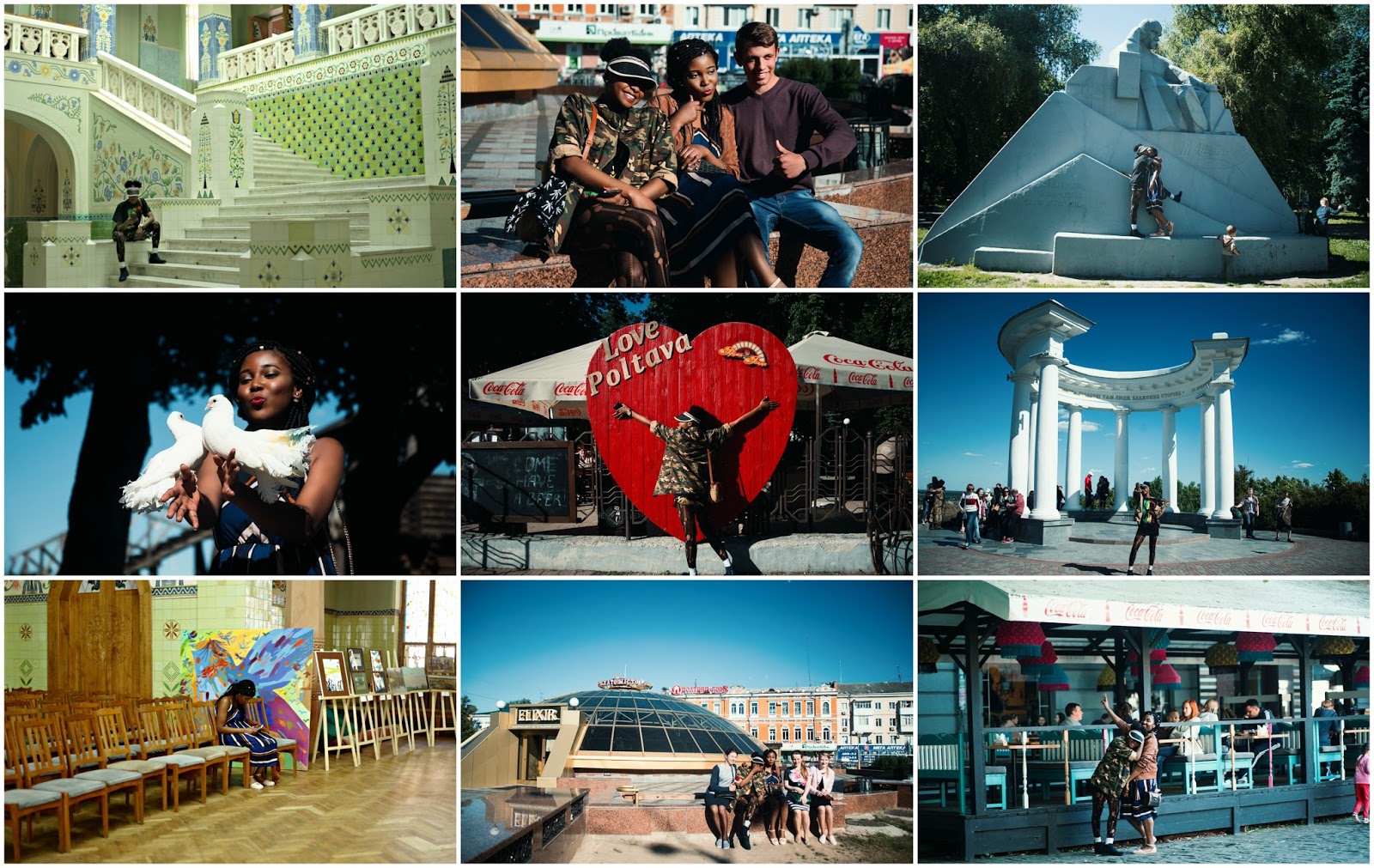 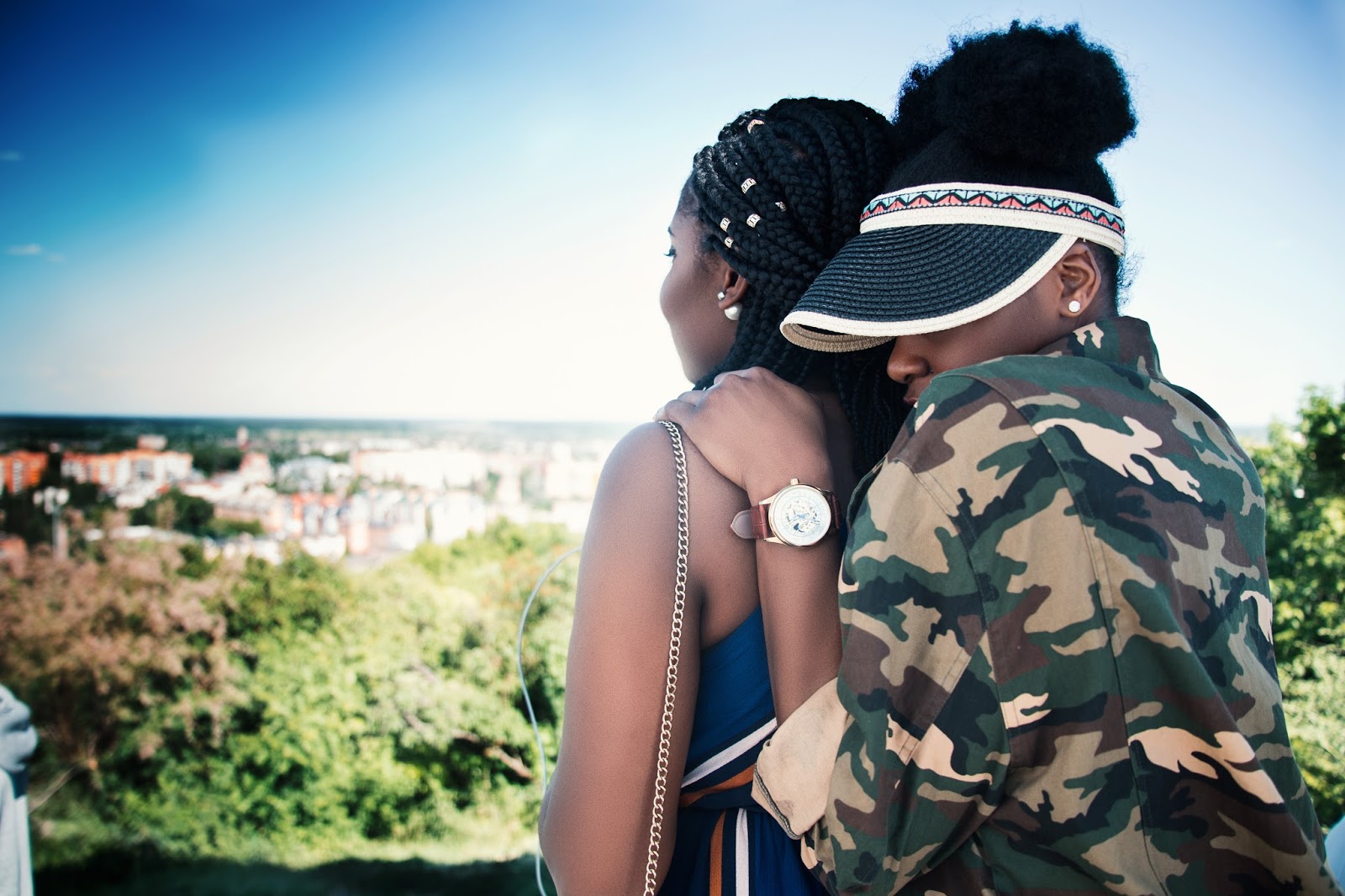 I have always wanted to tour the city of Poltava.
Poltava serves as a transit between Kharkov and Kiev, so while traveling I have always wondered what it will be like walking in the streets of this city.
So, finally I was able to visit the City for a tour, it was an amazing experience.
As you all know Ukraine is not an English speaking country so communication sometimes can gets really bad. In this city everyone wanted to understand and communicate with us, I felt at home even more relaxed asking questions than in Kharkov where every Ukrainian seemed to be sad and angry at themselves.

History of Poltava in short :
Poltava is thought to be founded in 899, though the city was first mentioned in written sources in 1174.
The name of the city historians connect to the name of a settlement Ltava, located on the territory of contemporary Poltava.
Poltava is a city of Ukraine situated in the central part of the country on the river Vorskla. It is the administrative center of Poltava Oblast.
Area of Poltava – 110 square kilometers.
The Poltava's estimated population is 294,962 as of 2015.
Poltava ZIP (postal) code: 36000-36499.
Kharkov to Poltava : 2 h 6 min (143.0 km) via М03. 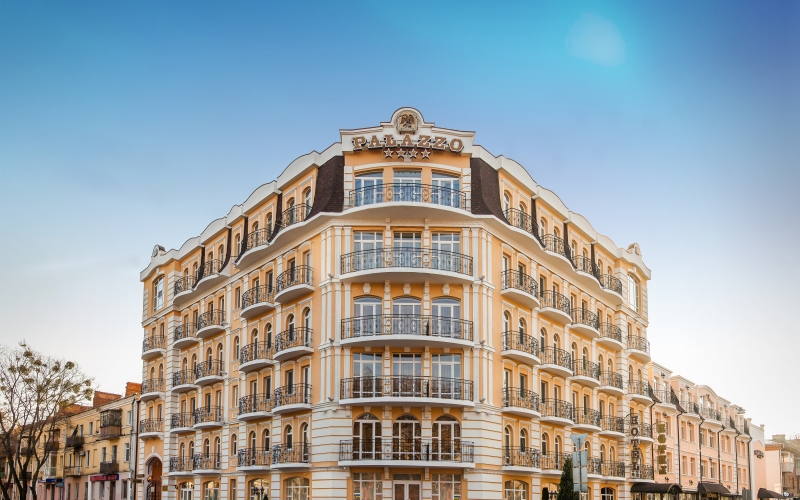 WHERE TO STAY : A week before, we secured our accommodation at the Four-star Palazzo Premiere hotel and resorts for a 2 day stay. The hotel seemed calm and the service was well deserved. The hospitality for so mind blowing which is a nice recommendation for anyone.
The Hotel offers a breathtaking panorama of the historic city.
Address : 33 Hoholya St., Poltava 36011, Ukraine.
Premier Twin Room :
Room(s): 1 Size: 23 ( m2 ) 248 ( sq.ft )
Room view: city view or courtyard view
Spacious room with a comfortable king bed or two twin beds has convenient place for work, and a spacious bathroom. Its windows face the hotel yard or the park area. There are some rooms with...
free in-room Wi-Fi, flat-screen TV, bath or shower, free toiletries, carpeted floor and desk. 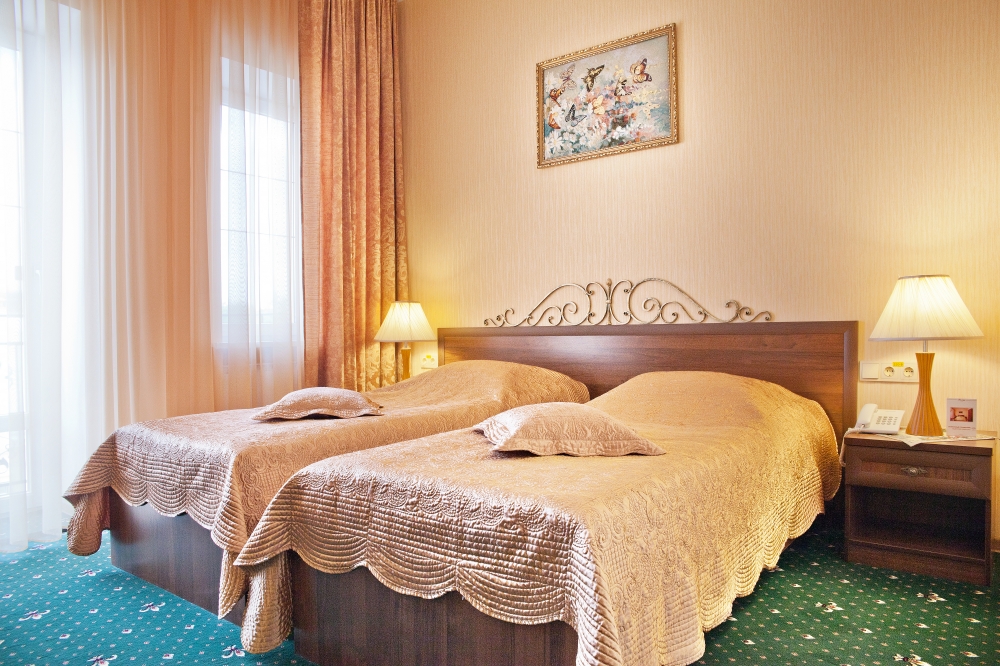 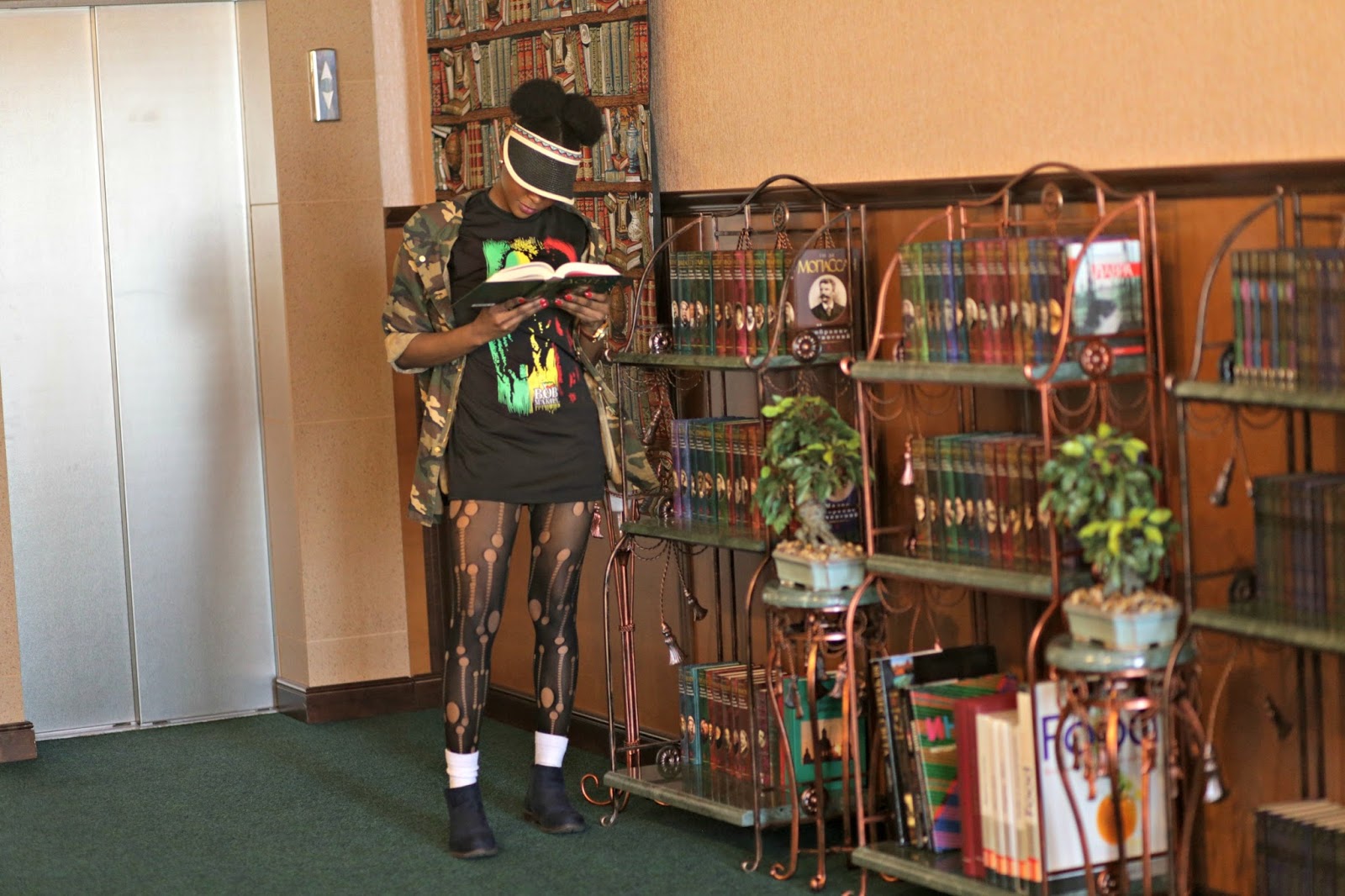 WHAT TO SEE : Of course we wanted to visit the mine tourist attraction so keep reading and enjoy yourself.
1. We where actually headed to the museum when we sited the Shevchenko Monument by Kavaleridze. The monument is located in the city center ( this monument is located in every city in Ukraine).
Address : (Konstitutsii Street, Zhovtneva Street, Poltava, Ukraine).
According to (Welcome to Poltava) In March 1926, a monument of Taras Shevchenko (1814 - 1861) was unveiled in the Petrovsky Park. It is a powerful figure of the fighter and Poet made from gray asymmetric blocks. 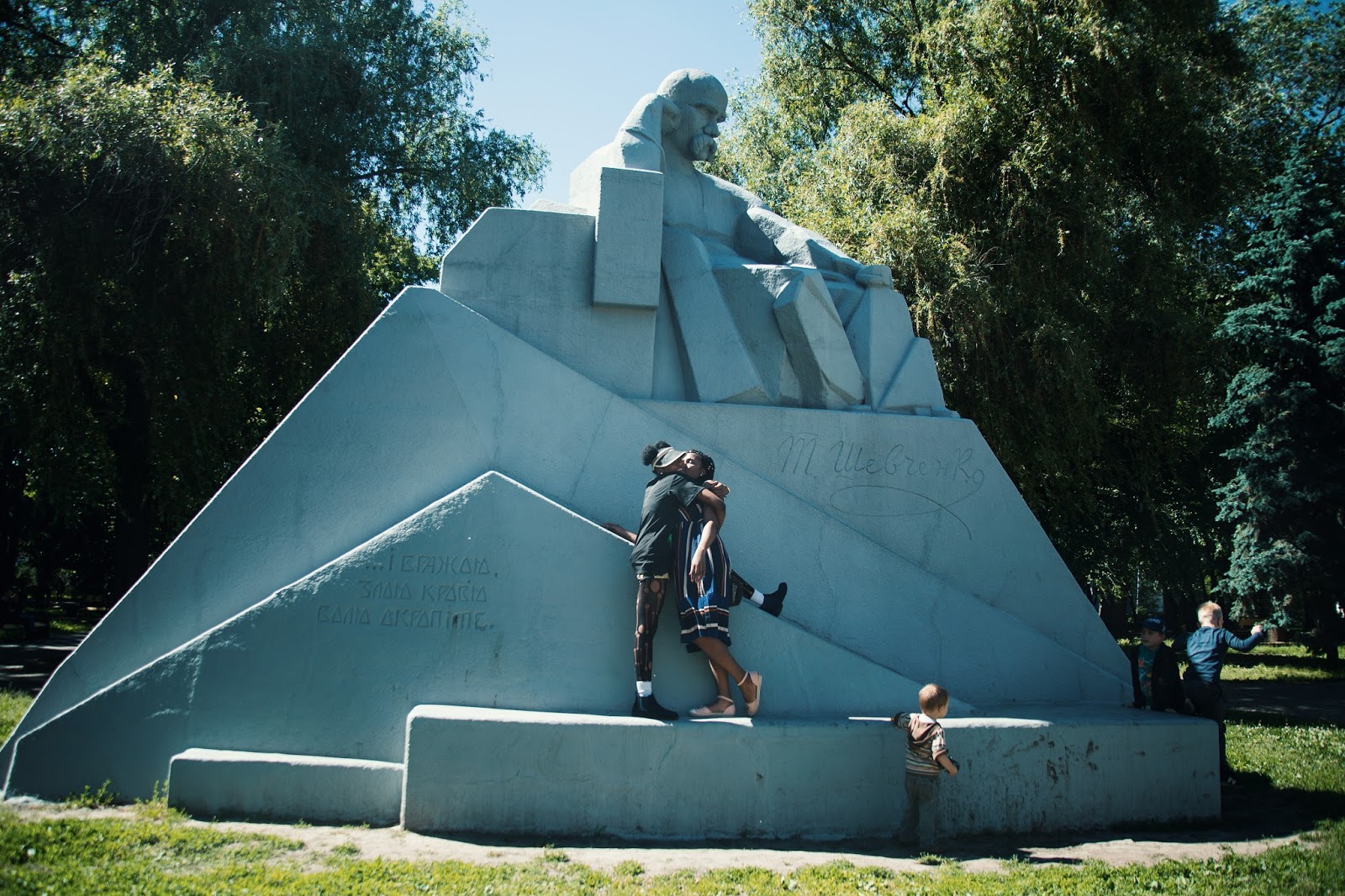 2. On reaching the Art Museum we were so trilled by the colorful design and art structured. It was an amazing site. As usually we stopped to take photos.
It is one of the oldest museums of Ukraine that was founded in 1891. The museum is situated building of the former province government that had been built upon the project of the architect V. Krichevsky in 1903-1908. It was designed in the Ukrainian modern style that contains traditional ornaments in the front exterior decoration, that is why the museum building was indicated in the list of the architectural monuments of national value.
Location :  ( 2 Konstitutsii Street, Zhovtneva Street, Poltava, Ukraine). 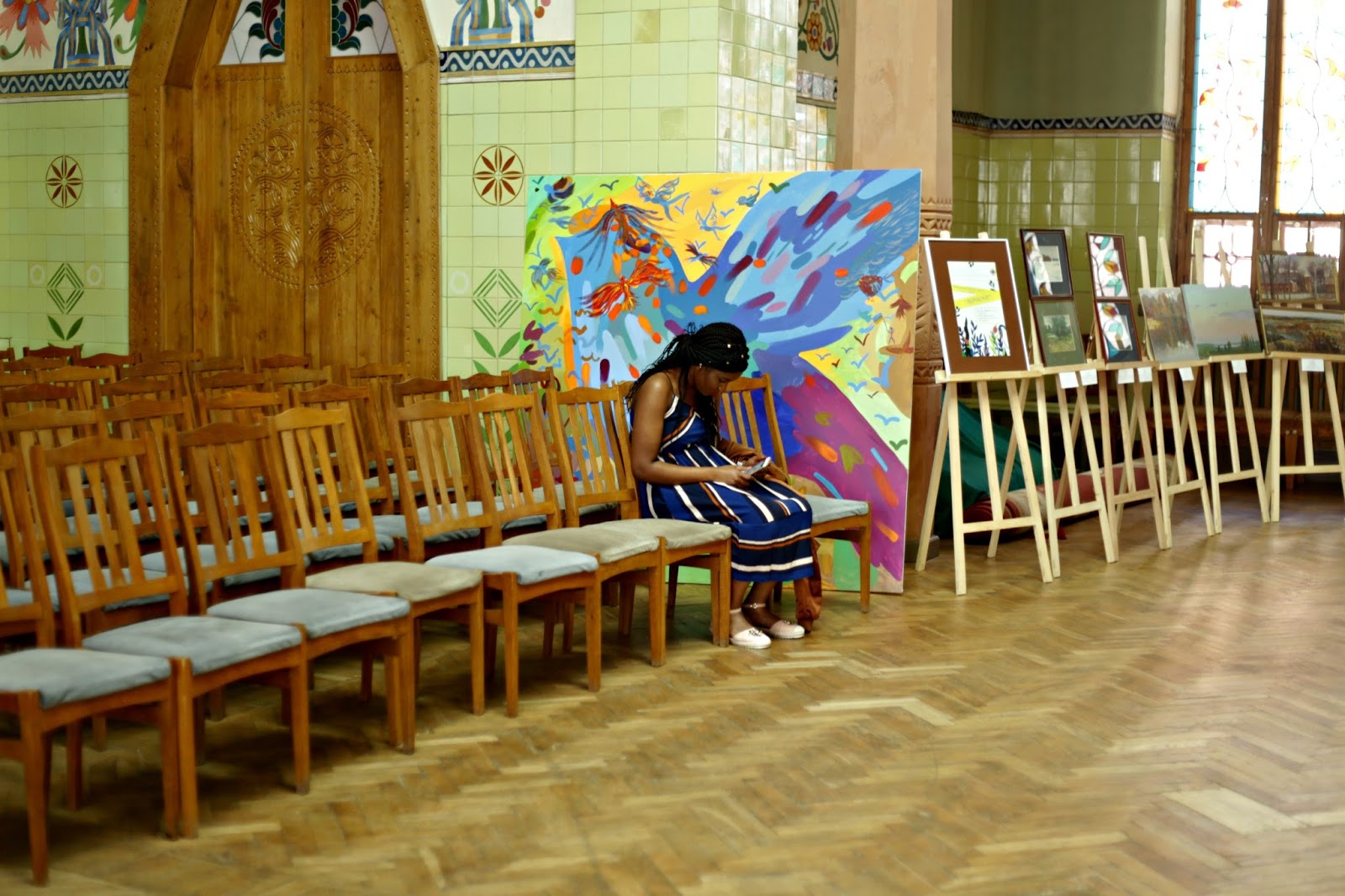 3. Monument to the Hetman Ivan Mazepa : Located at the  Cathedral Square  opened as Ukraine`s first large-scale monument to Hetman Ivan Mazepa.
It is claimed that he was awarded a title of Prince of the Holy Roman Empire in 1707 for his efforts for the Holy League. He was famous as a patron of the arts, and also played an important role in the Battle of Poltava (1709) where after learning of Tsar Peter I's intent to relieve him as acting Hetman of Ukraine and to replace him with Alexander Menshikov, he deserted his army and sided with King Charles XII of Sweden.
March 30 O.S. March 201639 – October 2 O.S. September 21] 1709). Wiki 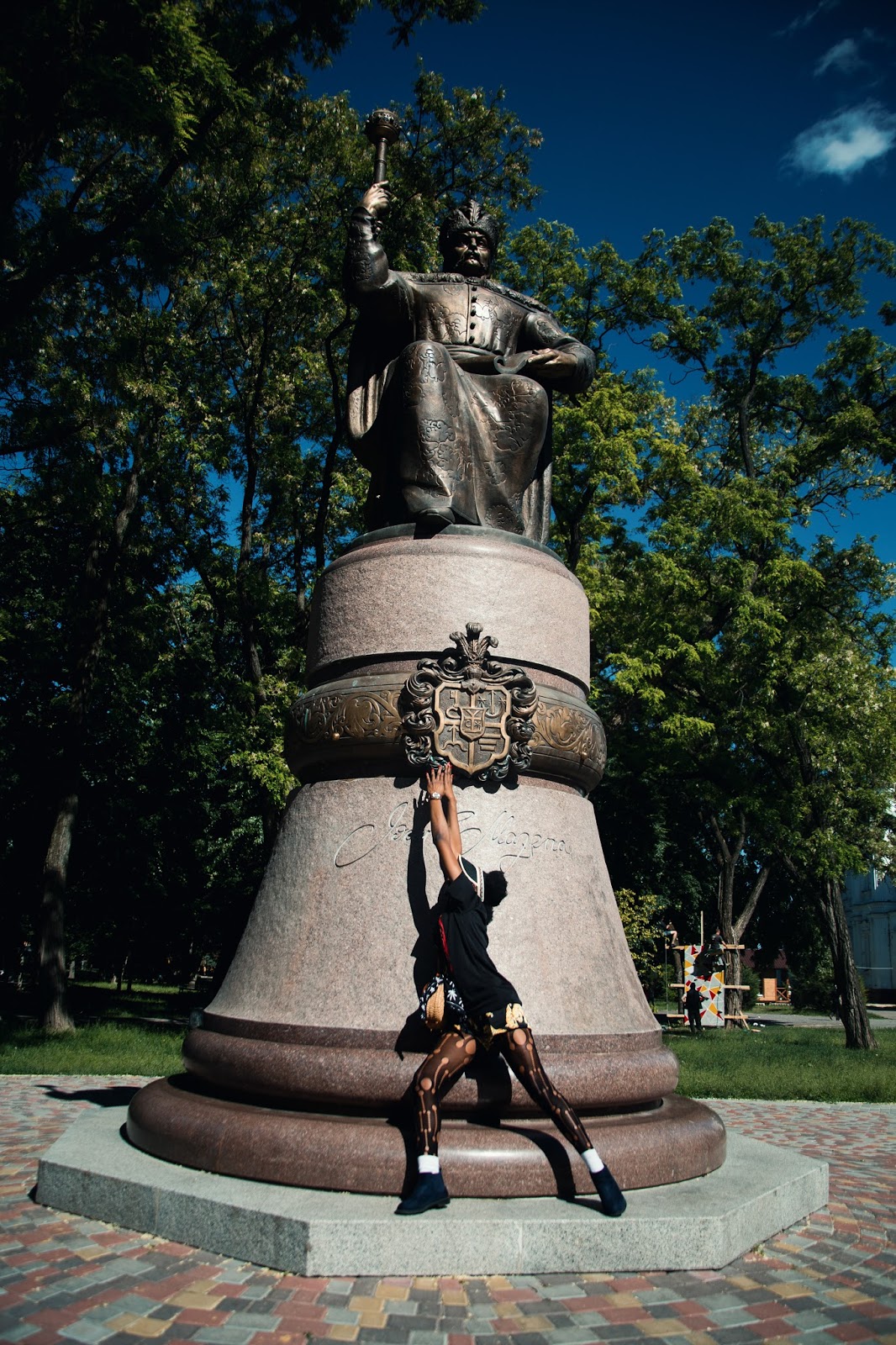 4. Uspensky Cathedral : Cathedral in honor of the Assumption of the Blessed Virgin Mary was built in 1748-1770 years. Originally there was a wooden church of the Assumption of the Blessed Virgin, with two-story bell tower. Documentary written evidence of this church, which was then "Stadion cathedral" dating back to 1695 year. Then the church was moved to the village. Ivashka Poltava region and use it to build a new church. Read more here. 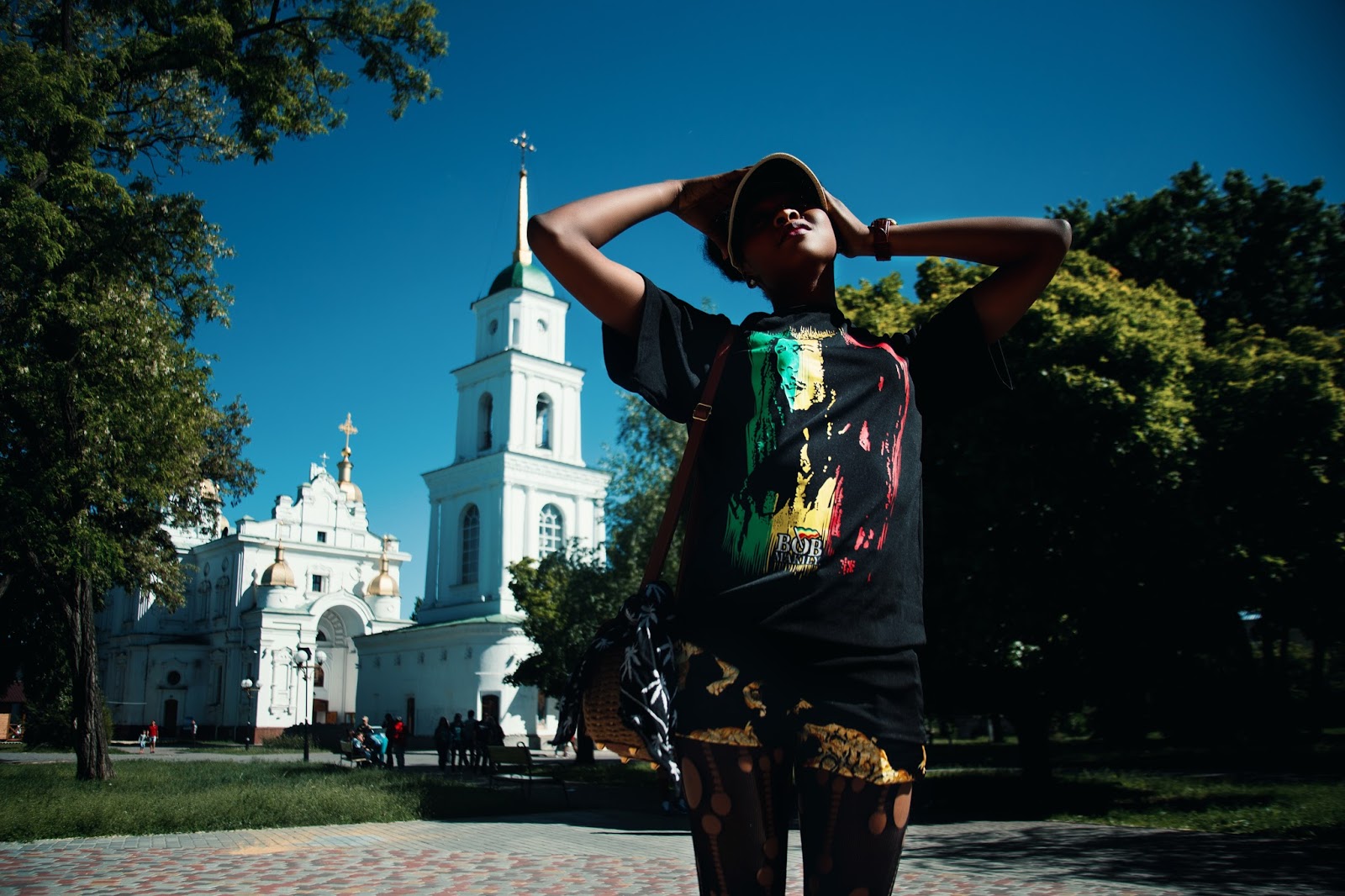 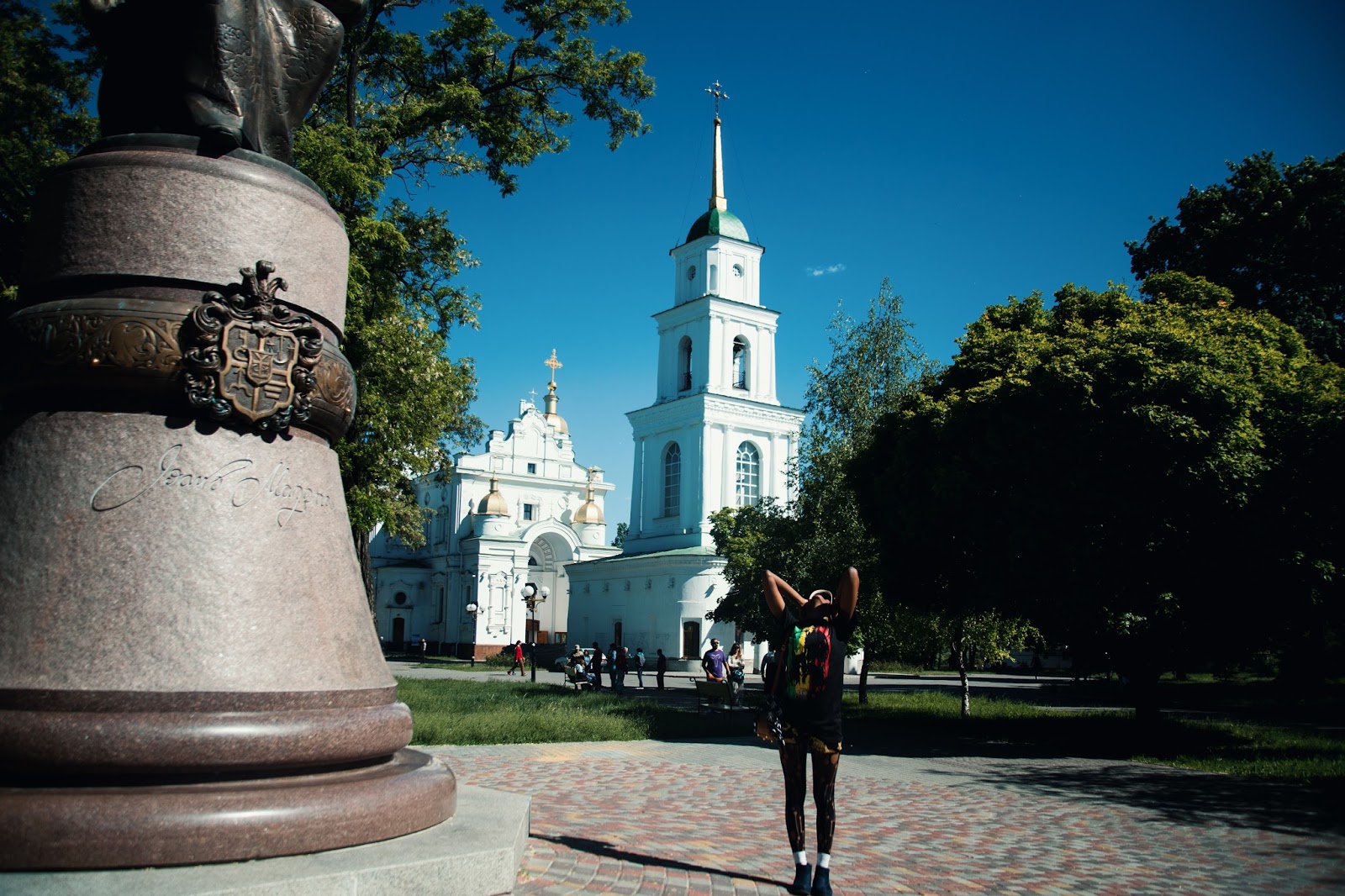 5.By this time we already started feeling hungry and wanted to eat but the White Arbor or Rotunda is not far from the Uspensky Cathedral so we decided to view the beauty and the most popular attraction of Poltava The White Rotunda.
Location : Ivanova Gora (Ivan Mountain), Poltava, Ukraine.
Lots of Tourist, taking photos and having fun.


The White Rotunda was opened just before the celebration a bicentennial of the battle of Poltava on June 27th 1909. This monument was erected on the spot of Podolsky watchtower and bastion of the former fortress of Poltava. The fortress was not protected by stonewalls but only by earthworks, palisades and the steep slopes of the hill where it was built.

During the German occupation of Poltava in 1941-1943 the White Rotunda was destroyed because an artillery observation post was located on it’s site. In 1954 the Rotunda of Peoples Friendship designed by architect Vaingort was opened here to mark three-hundredth anniversary of Pereyaslav Treaty signed between Russia and Ukraine. In 2004 the monument was reconstructed and the following line, written by famous Ukrainian writer Ivan Kotlyarevsky was cut into the top of the arbor:”Only there each and all live in peace, quit and chime could be a blessed land and a happy people.”

Near the White Rotunda there is an observation area that attracts many tourists with marvelous view of the suburbs, Vorskla river and Holy Cross Exaltation Monastery. In 1974 a memorial stone was opened here in commemoration of the first mention of the city of Poltava in Ipatievskaya chronicle that dates back to 1174. By welcome to Poltava. 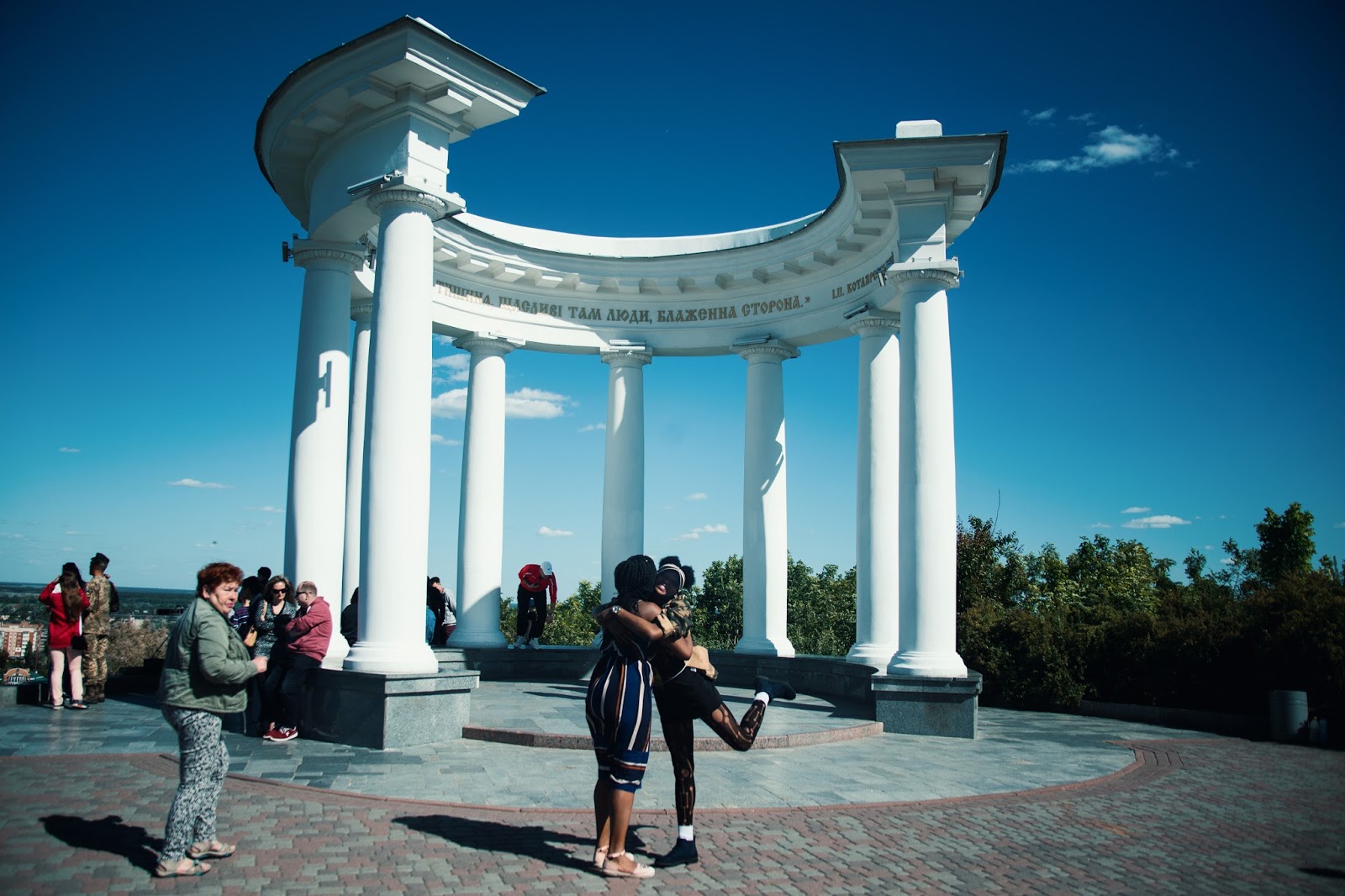 Things to DO : Play with Birds.
Close to the Rotunda a woman standing with White doves, It attracted Chioma and she decided to give it a try. Of-course she was a kinda scared but made it through the session with these lovely photos. 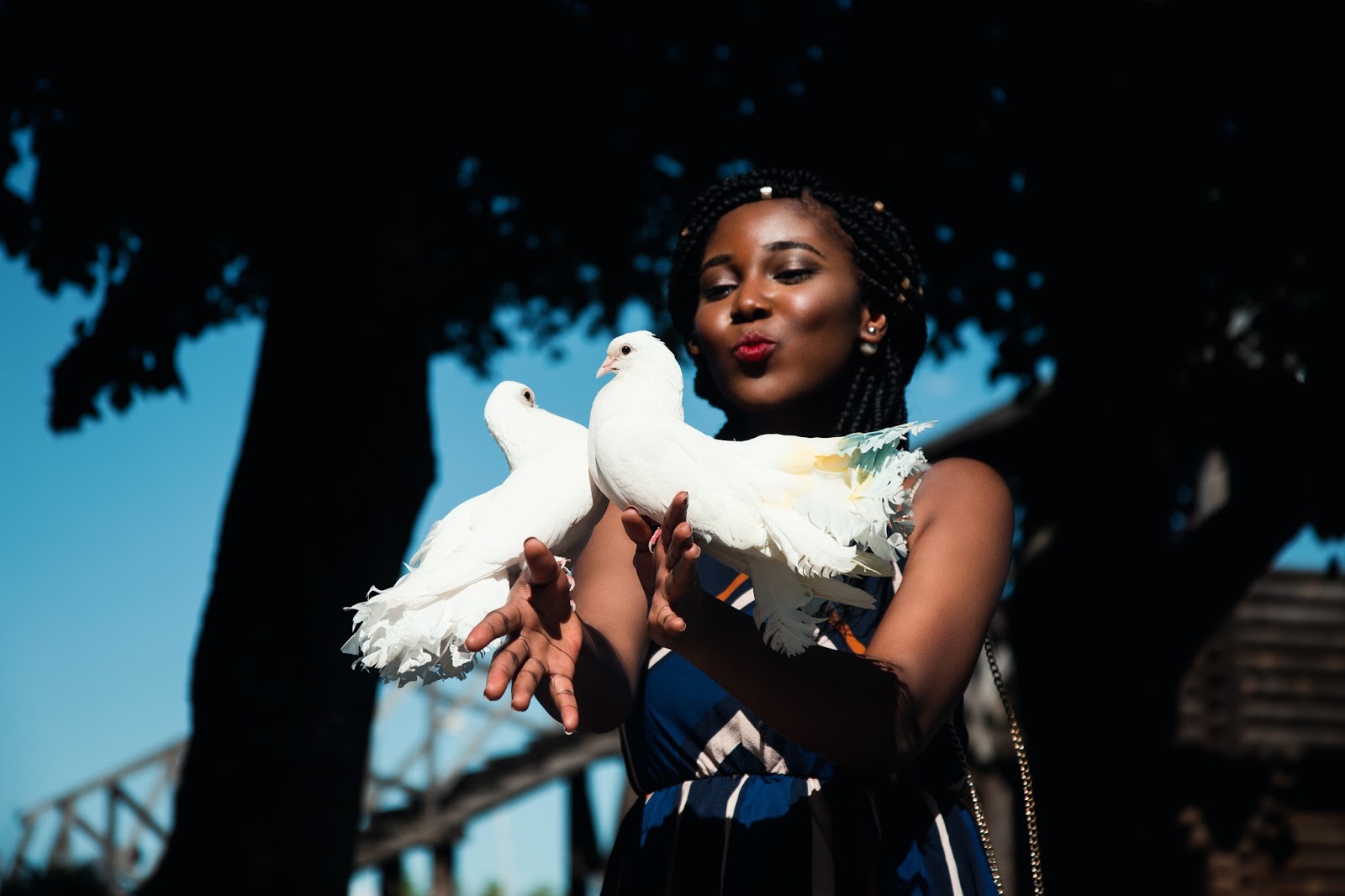 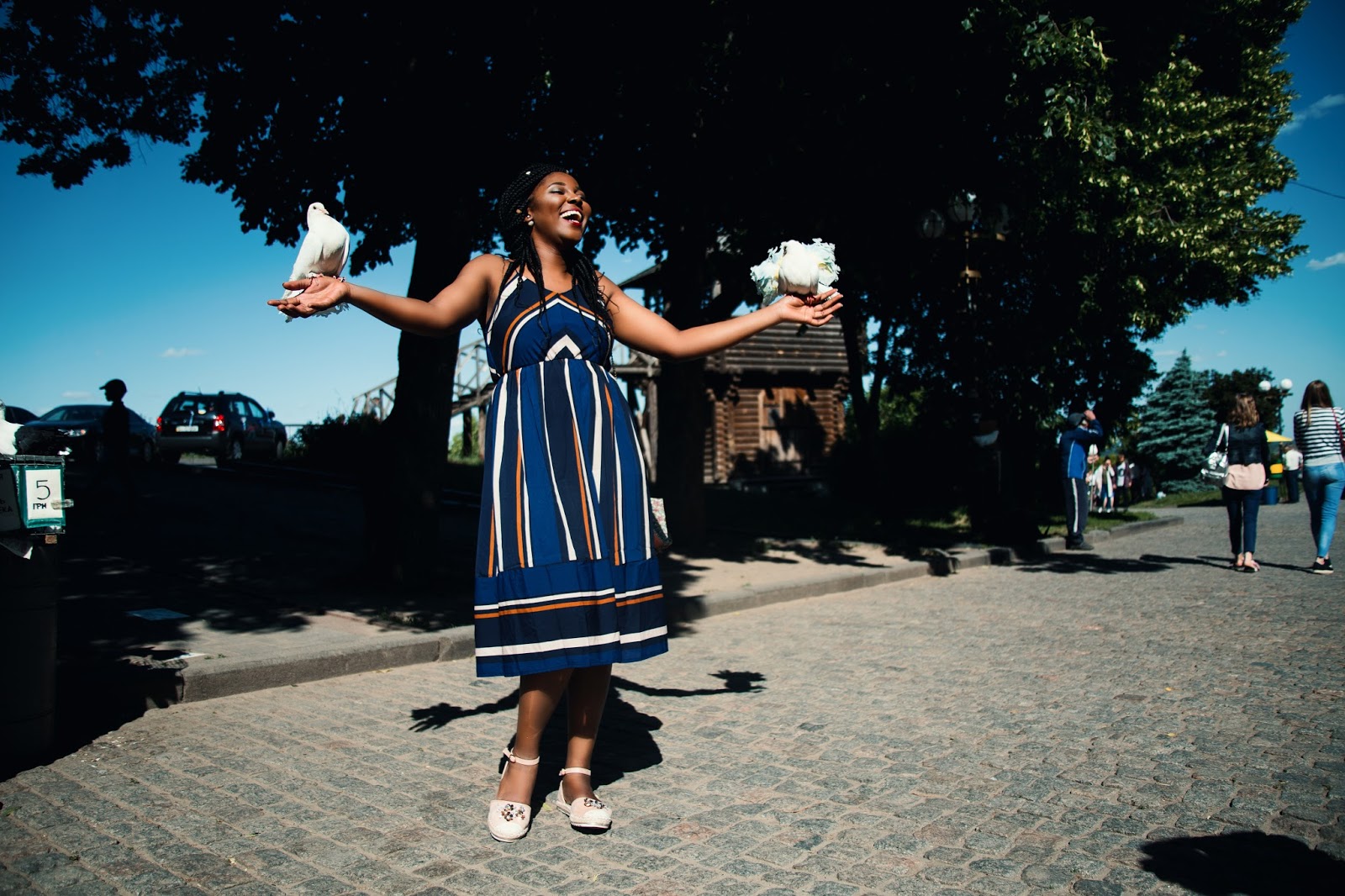 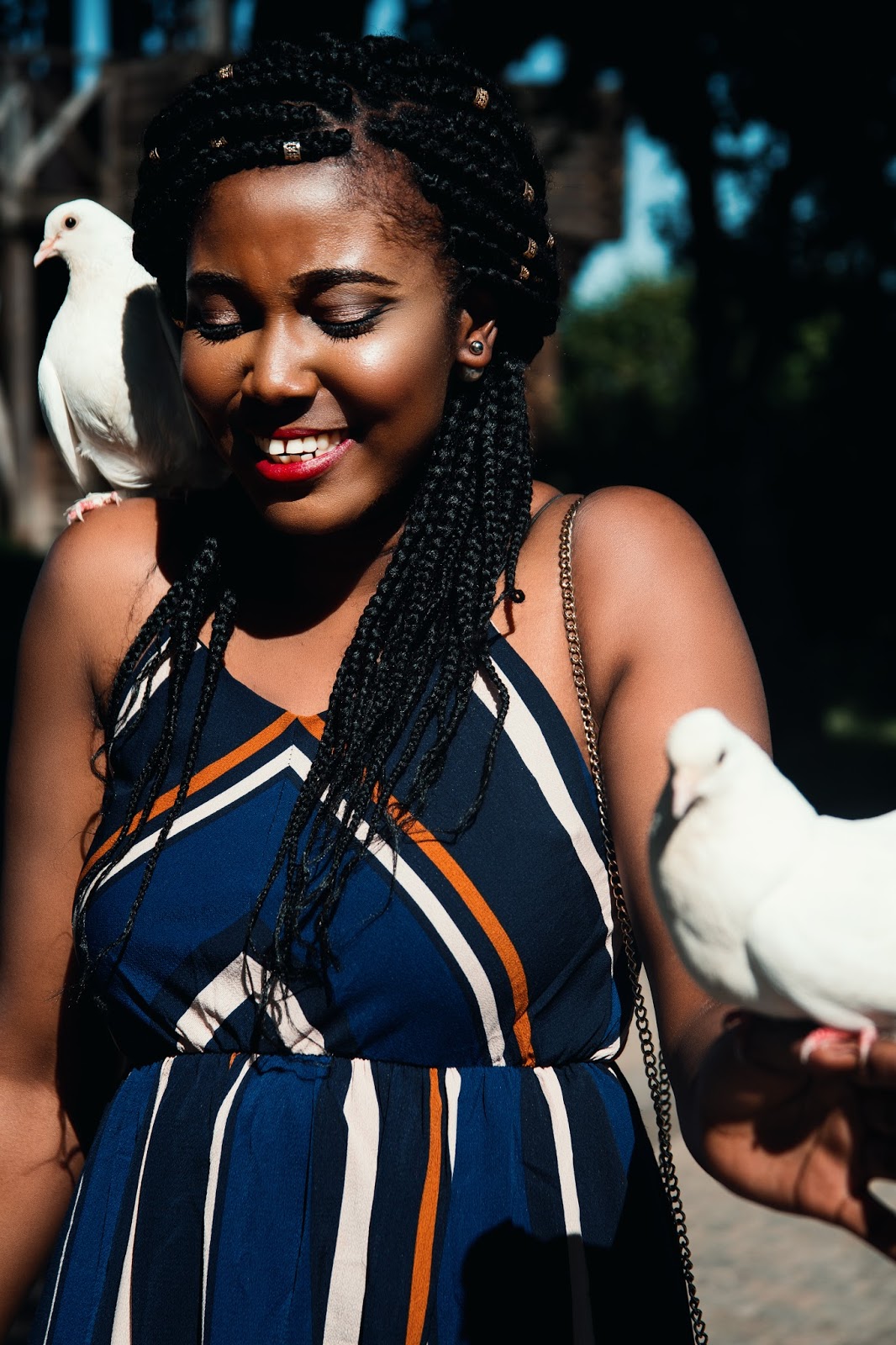 Poltava Dumpling Monument :
Address: Sobornaya Square. This monument memorialize the traditional Ukrainian dish ‘dumplings’ (‘galushki’) and looks like a huge bowl full of dumplings and a spoon. This monument symbolizes prosperity and abundance of Ukrainian family.
Thousands of Poltava inhabitants and those of the surrounding villages gathered on occasion of the celebration due to the unveiling the Shevchenko monument.
The battlefield and its monuments are the major draw. Places to see in the town include the October Park, the gun-barrel-shaped Column of Glory and the Spassky Church, which is actually an outer shell protecting an earlier, wooden church inside. 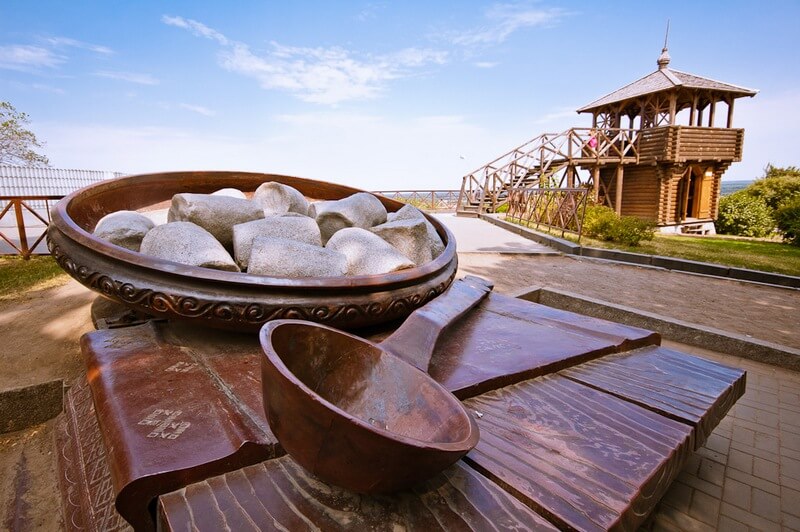 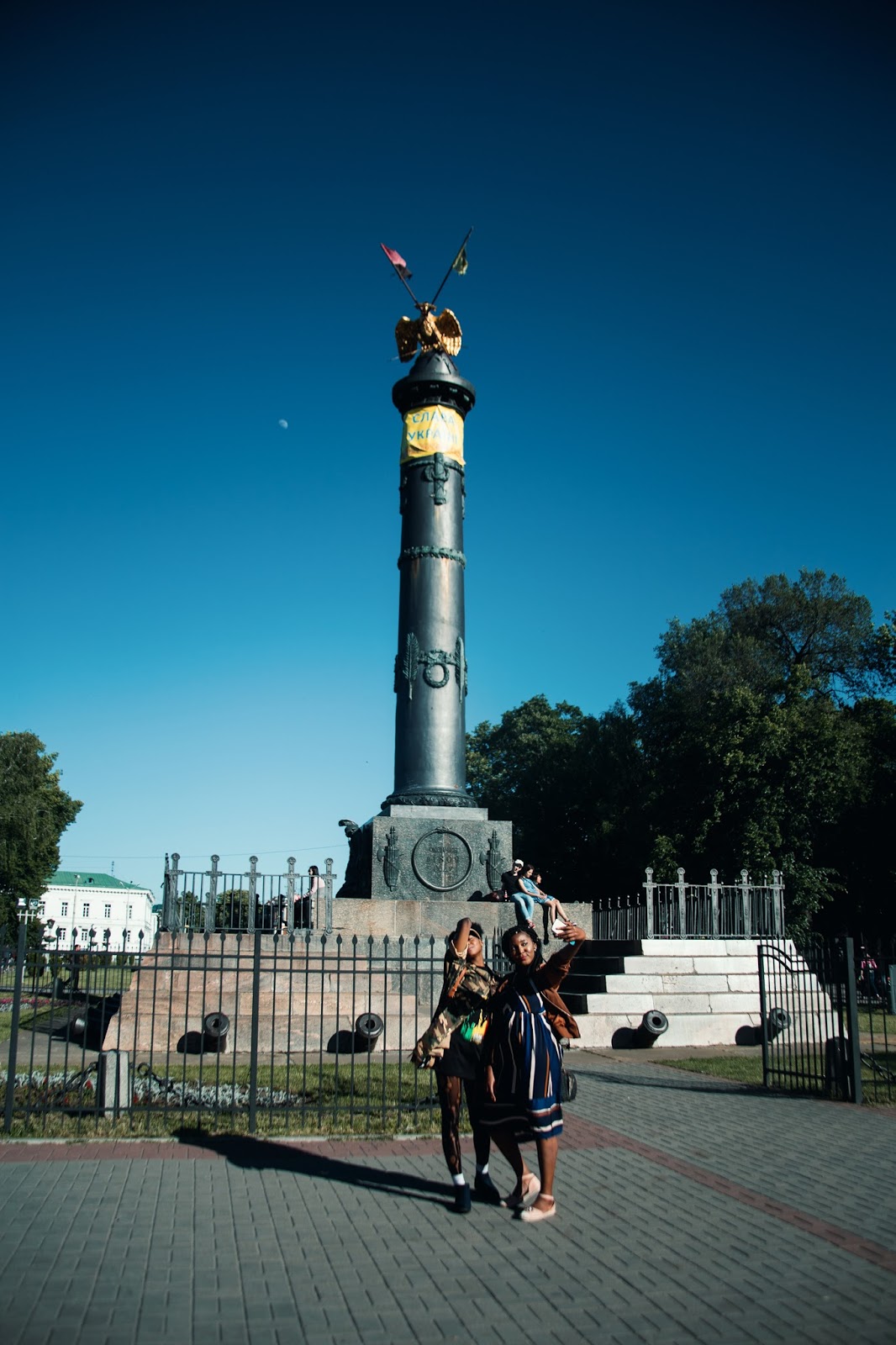 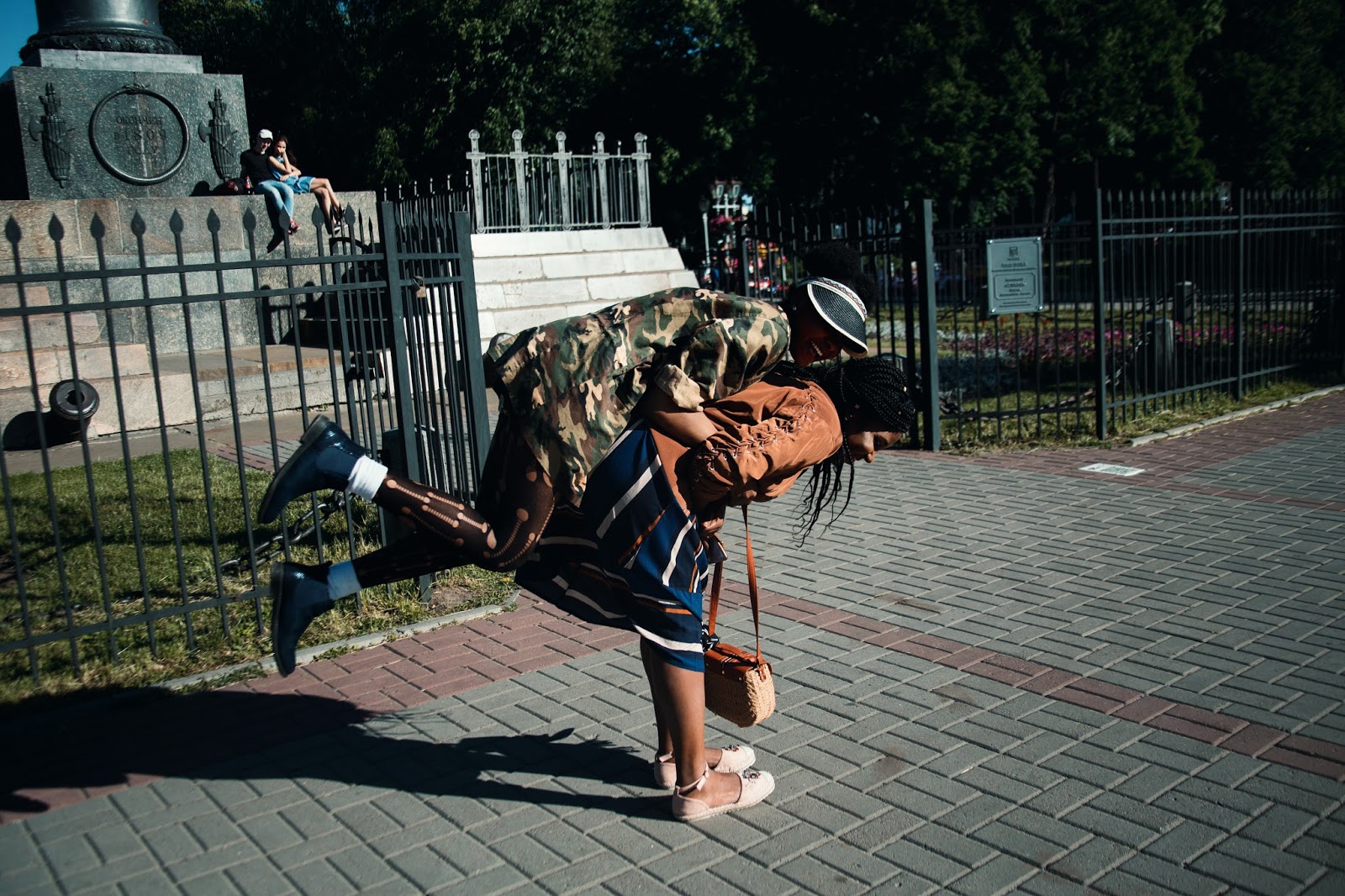 WHAT AND WHERE TO EAT:
In the center stand lots of restaurant, both traditional and modern.
We finally stopped and had Newyork Pizza. 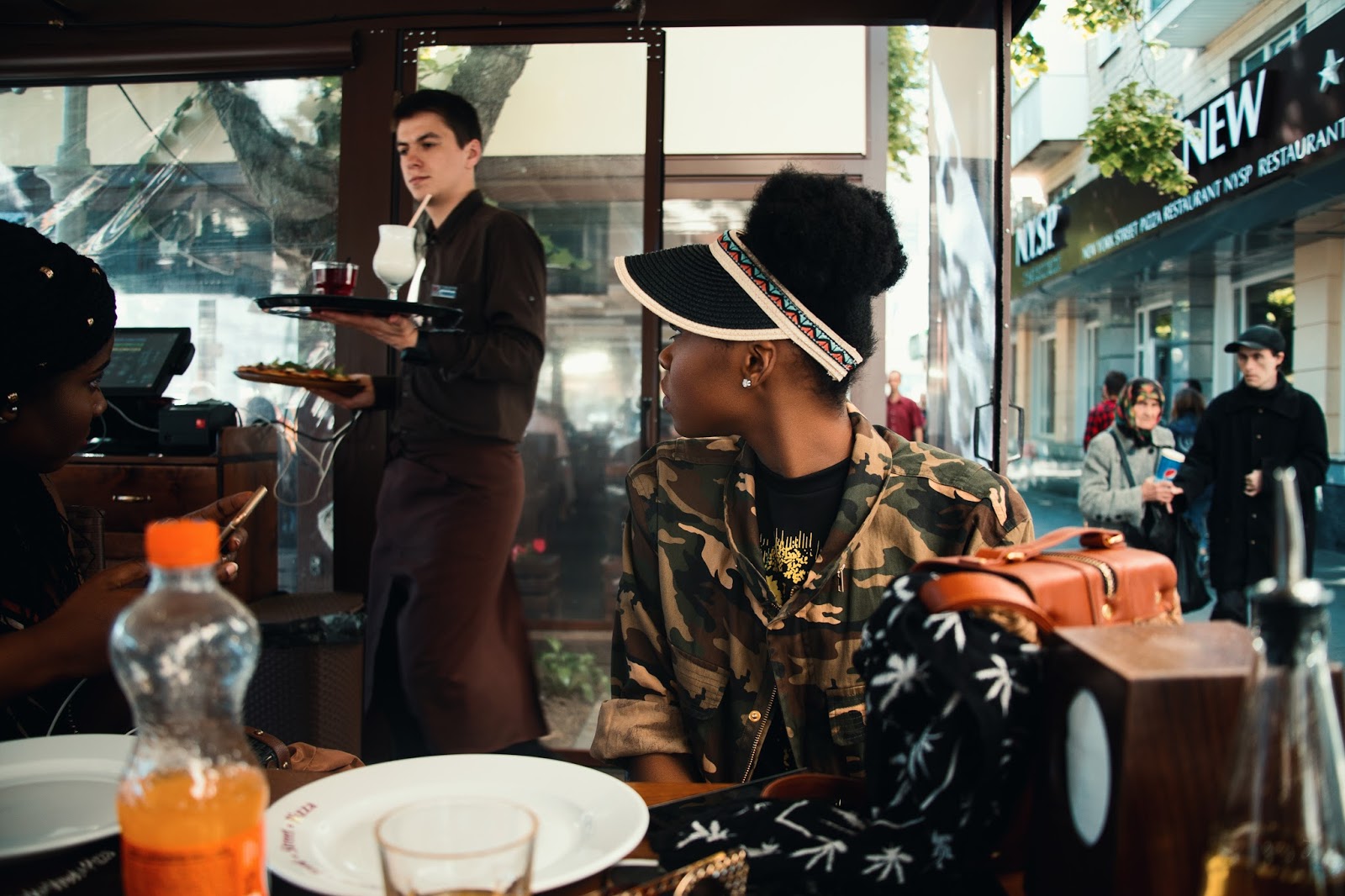 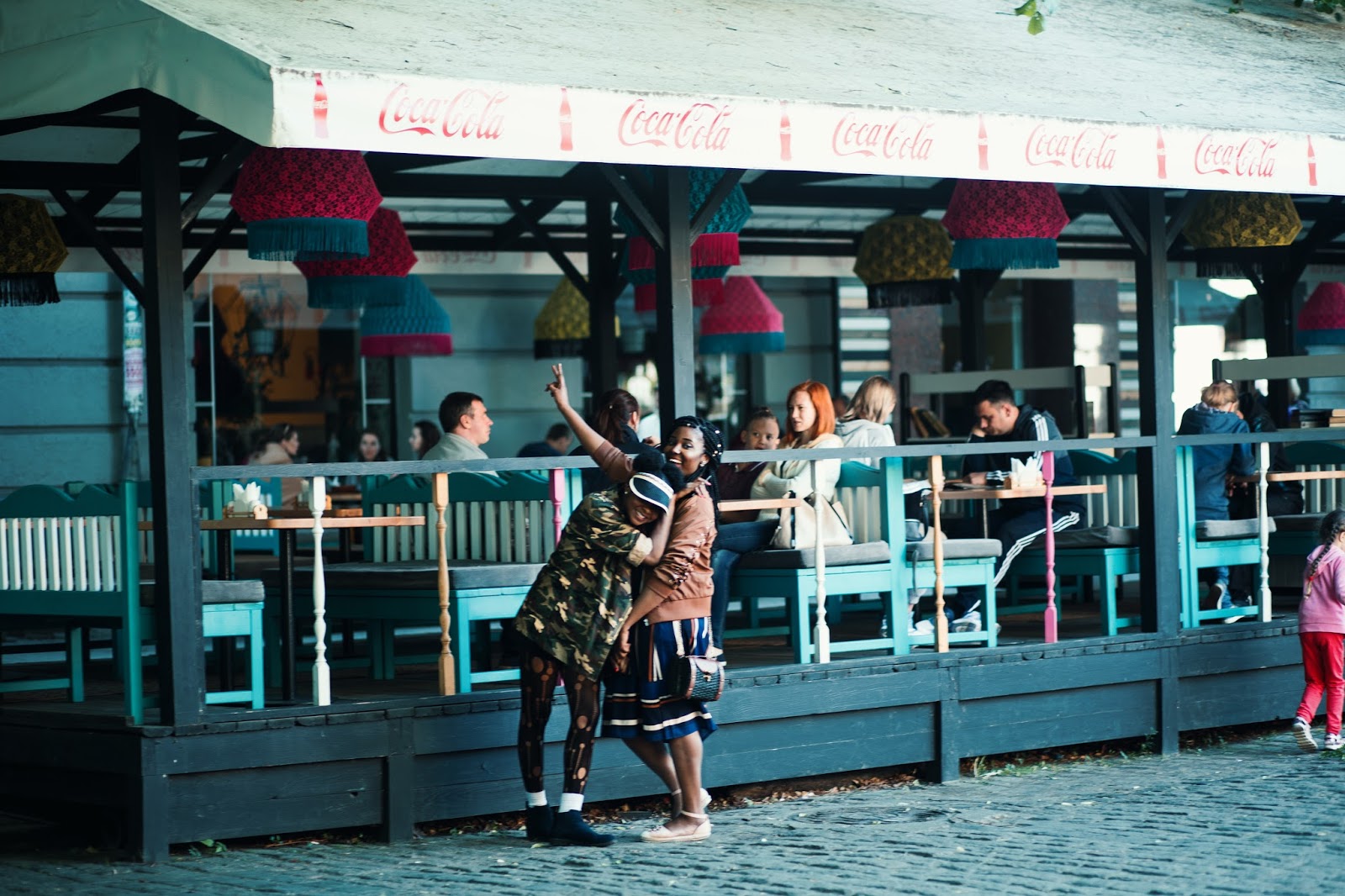 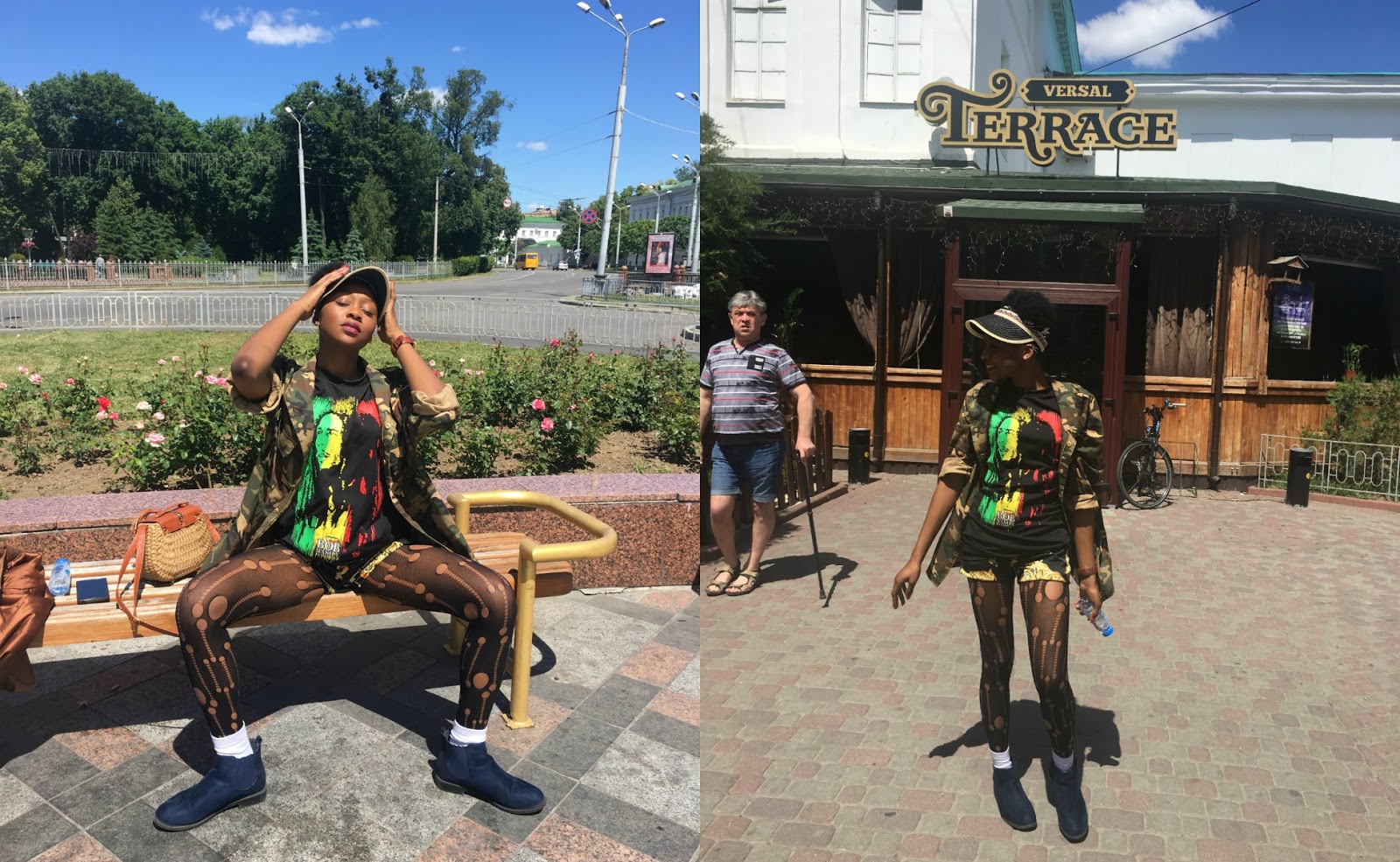 Fun Places : The Cinema for a lovely movie time.
More Beautiful Photos from our trip.
We meet some Happy people who wanted to take photos with us, of-course we accepted.
Generally I think Poltava will be more open to Civilization than any other City I have visited In Ukraine.
I will be traveling to different places this summer, subscribe to the news letter for more. 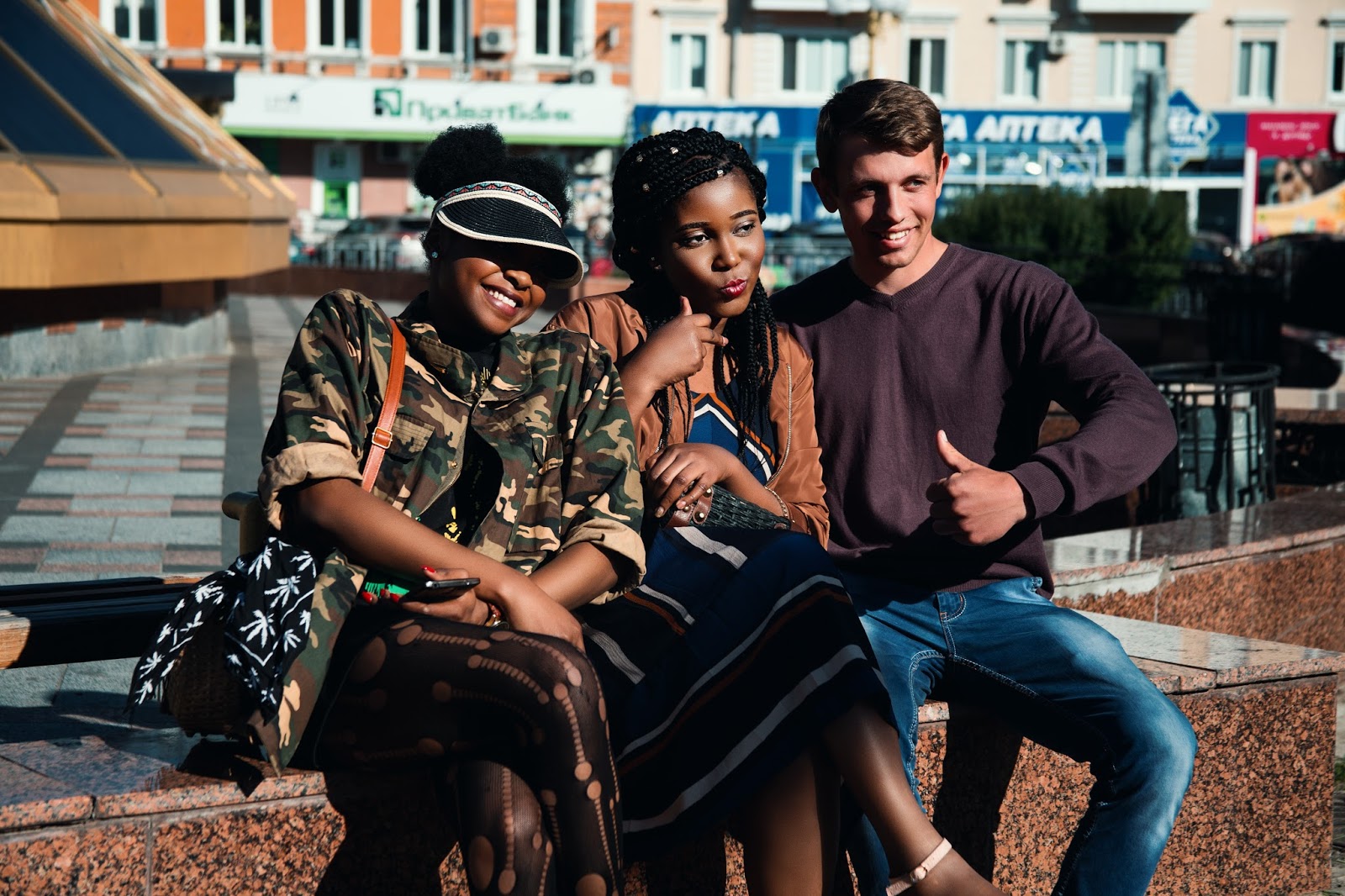 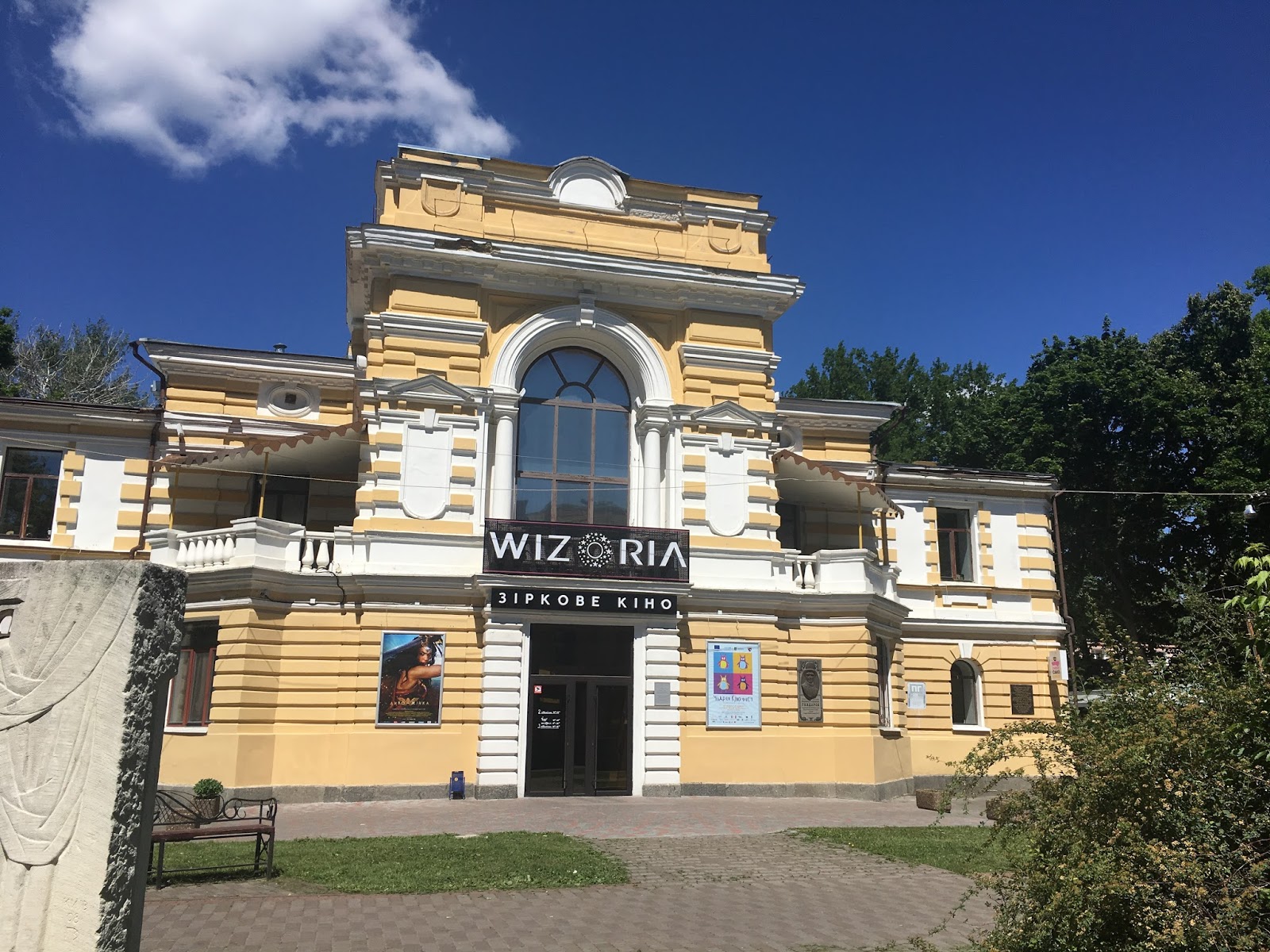 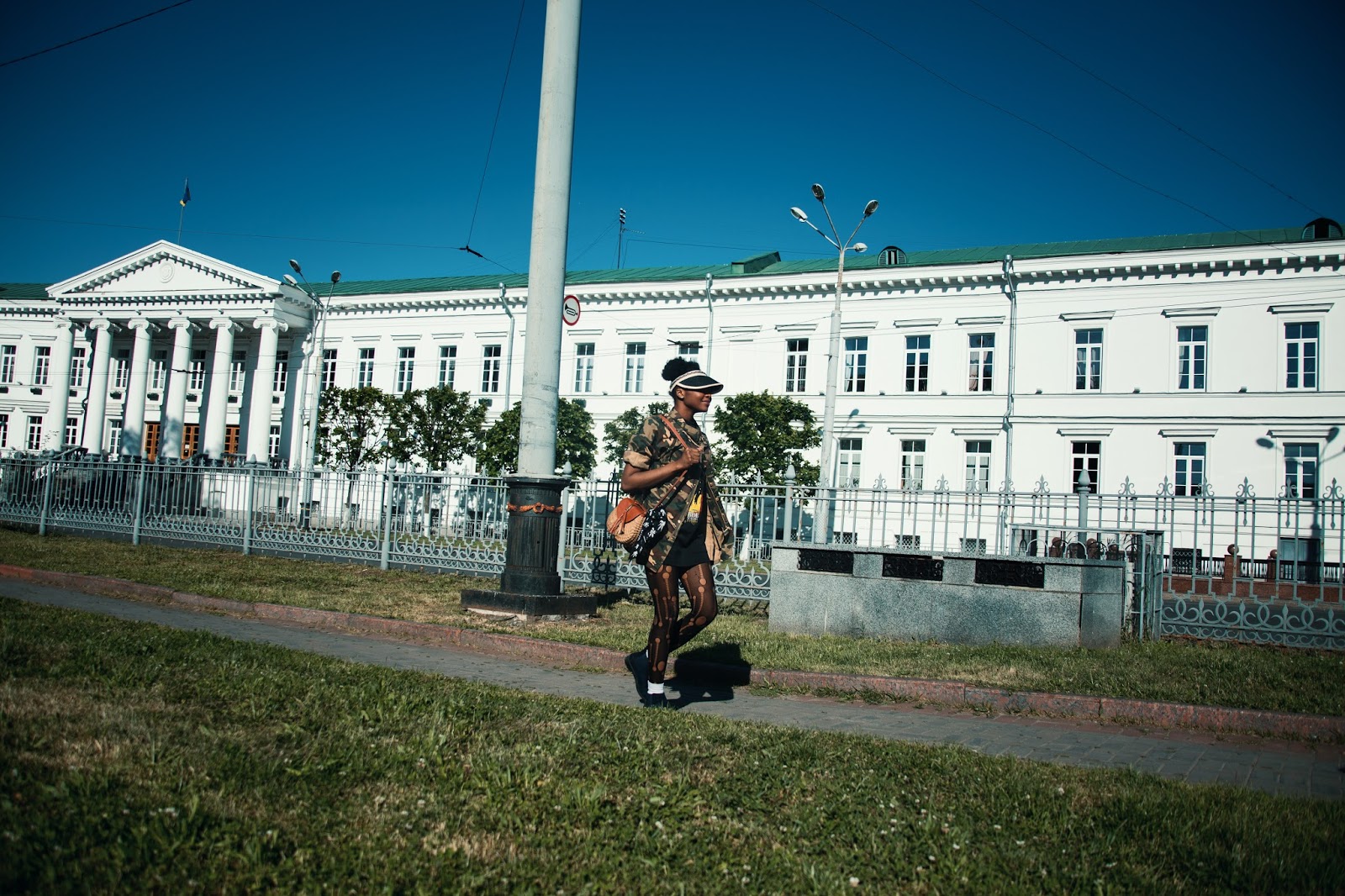 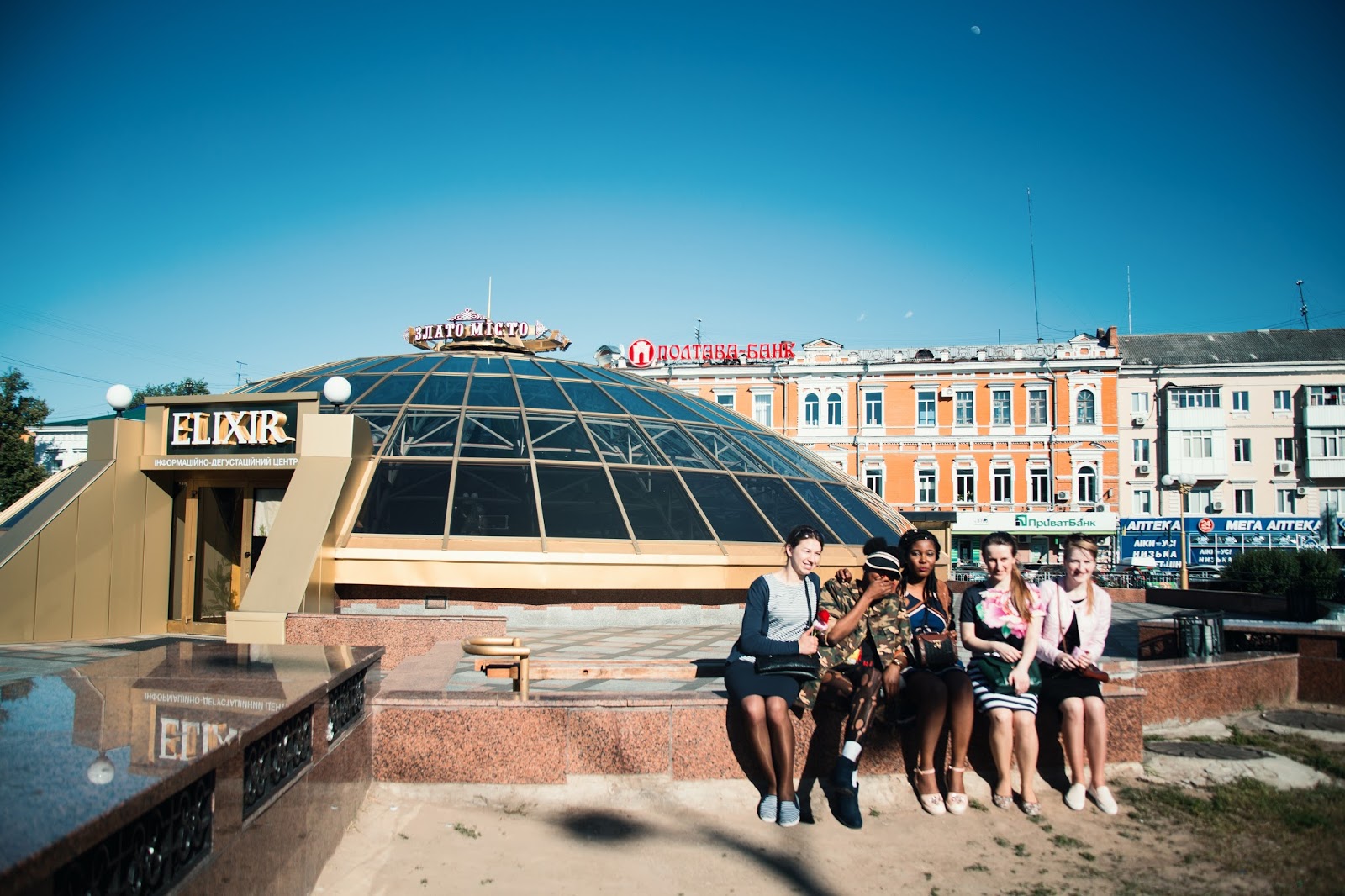